Tatsuo has always been a strong willed war hound, his entire life has been dedicated to forging his mind and body into a well polished weapon, the likes of which can defeat scores of monsters and humans alike. His twin on the other paw...is his exact opposite. Akio is a gentle war hound who only wants to bring happiness to others, yet in this kind of world that is somewhat hard to do as blood and fire are often spilled all around beastmen such as himself and his brother. Not helping matters is the demon which terrorizes them in an attempt to corrupt their flesh and souls for its own twisted amusement.

And now the twins are about to come face to face with a demonic plot...the likes of which will forever change both them and the world in which they live. ..unless they can break the chains of fate which are tightly wrapping themselves around them.

This RPG Maker MV project that I am working on is currently within the early stages of development. With that in mind, I wanted to share a semi-teaser for what to expect from the full game. You can learn more about my plans on my patreon:

I hope you have a lot of fun and will support me in my endeavors to make this game a huge success!

Esc Button - To Bring Up the Menu

Directional Keys - Move the selection within the menu

Enter Button - To Select a Command

Esc Button - To Retreat from a Command Window

We have a two chapter update this time around!

This chapter sees Akio rescue his packmates from the prison they were sent to and their journey to find another heartstone.

This chapter finds the pack going to Amber Sandlands into order to find another heartstone, however what they find along the way is a war between species and demons plotting, and a truth that rocks everyone.

Here's a walkthrough in case you get lost!

Fixed:  The exit for the cave behind loyalist camp in Amber Sandlands.

Numerous grammatical and spelling errors thanks to:

If there are any problems, concerns, errors, do let me know on my Discord Channel -

One quick question. Where can i find the Sidestepper, Parry and Plus Attack anima? Or is it not implemented yet?

Also, can you update the guide please. It's becoming outdate as sweet dream only recover 10% Aether point, which is a bit small in my opinion as aether recovery item are a bit rare to find.

I finish the current version of the game and all of the quest as well as collecting all the dragon treasures and hexagons, also i have gain the 2 special items after defeating the 2 guardians and my level sat comfortably at around 100, i manage to defeat master Xe 4 times as well though i have to wait until Tatsuo become a lot more powerful to try defeating him alone.

The game was very fun and engaging and I liked it very much. I also love the interaction of our main character, the truth that came near the end of chapter 6 supprise me and it was already hinted several times but i didn't expect it to be like reicarnation.

I look forward to more content in the future! (also so i can try challenging master Xe again as currently the game doesn't allow to come back there.)

Well, if there is anything strange it's the typo and the restaurant in Blacktide that cause the character to dissappaer and i have to close the game to reload... (thank goodness i have the habit to save often). Oh and the stange swapping door of the 2 house in the resident district of Platina and the door where you fought the gemstone guardian in the Silent Sanctum. (Noooo... my money, 30000 gems gone just like that...). Also when i enter the boss room of the Sacred Cave dungeon agian after defeating said boss the game crash. (Once again thank god i'm careful and saved beforehand). Well, thats all that i encountered. I hope those get fix and i look forward to the complete game!

Glad you enjoyed the game. I fixed the errors you spoke of, so expect to see them in the next update coming in July!

love the game been playing it nonstop for 3 days, i got a little problem, after the dragon princess fight after isabel knocks out the party and were in control of akio i forgot to read the parchment and have forgotten where to go after escaping where was the pace circini said to meet?

Head to the pink colored apartment building at the port town.

Also, glad you're enjoying yourself!

thank U, i tried going there but the guard at the front immediately tells me to leave.

Guess I’ll have to go back to a previous save.

Thanks for the help though 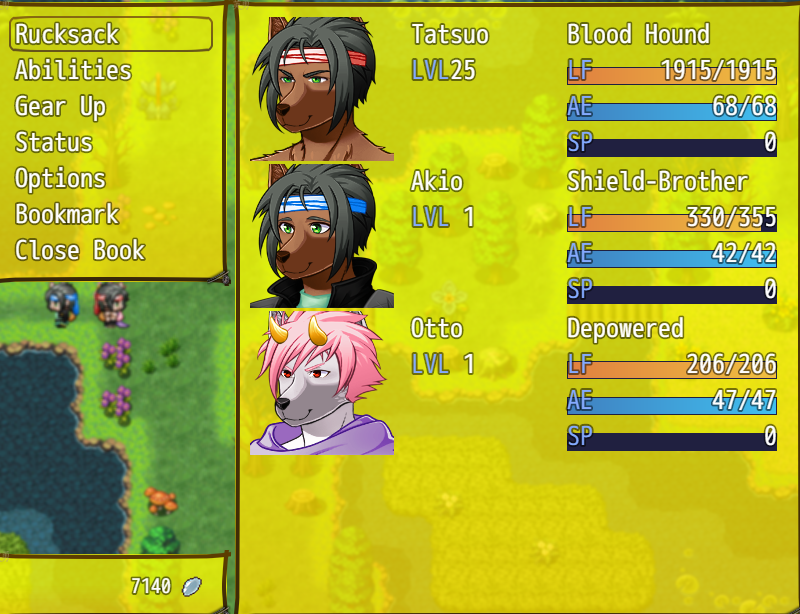 Hay, I don't know if there's is a glitch but my character went back to level 1.... After I beat the Fallen Capital and Tatsuo and Otto, just letting you know.

Okay. I was just wondering

I'm sorry about that.

I'm going to remove that version since nothing seems to make it work.

I really love the game and the art work you have done <3 but im having issue with the save file not working and when i close the game, all progress lost ;__;,is there a way to fix it? i dont want to play allover again and again.

Which version are you playing?

The v3 i think was the ver i was playing

Alright. I'll make changes when I make the next update.

Hey, there could you make an Android version of this game?

Sorry, but I don't know how to do that.

Played all your other games, projects, and this one i found the best and more charming.
Keep the good work man

I'm not sure. I don't know much about Android programming for the game.

it's fine don't stress thanks for the information thought

Emotionally support counts for something!

It shouldn't be an issue to pay with paypal or over your bank account (not sure). I'm using paypal on Patreon.

Then you... should get a new one. Internet shopping is pretty useful, you know?

not that easy believe me not in my situation

Why haven't more people supported you on patreon yet?

Because I need to make more updates!

They are coming, I promise!

the October 26th 2019 update, what changed exactly? I didn't see any patch notes in my feed o.o

Sorry about that. There were some minor bugs in the game to stop progression and I patched them out. I didn't post an update since I was waiting until I could post some updated content.

I beat all the bandits, talked to Mike, bought a room in the INN and had Akio sleep in a bed, but what do I do now? I can't really do anything besides fight and talk to the npcs

If you didn't get the prompt to go to the northern cavern please download the game again as I made a recent update which will trigger, allowing you to speak to Gabby at the inn after dropping Akio off.

I got the prompt, but where is the northern cavern?

North of the port town once you exit out through the front area.

By port town, I assume you mean dolphin peak, but I can't go anywhere. All there is the old tower, the ranch, and an empty bridge.

Did Akio leave from your party after you went to the inn after speaking with Mike?

I get an error when I tried to go in the ranch. The game failed to load data/Map708.json.

I re-uploaded the file.

Please let me know if the problem is fixed now.

Thank you for your patience.

so whe is it the next update be?

I want to work on it this month, but I'm trying to get this new mini werewolf game out by Halloween!

Sorry for the wait!

i'm stuc with that too

I am stuck.I dont know if it is a bug but when I finish the tower,then I talk to Mike and then to the INN to the bar and came back to the bed and nothing happens. Pls i need some guidence ty very much.

I love the game and the story really good. Have a nice day.

Can you post a screenshot, since I'm not sure what you mean.

Can you post a screenshot, since I'm not sure what you mean.

Any plans on making an android version?

Not at this moment.

I really love the game so far! What is the Angel Feather used for? Also who's the character on the left?

id assume the main characters brother. im not sure but i think so.

Sorry that I didn't get back to you sooner.

Sorry I meant the one on the right! I haven't met him ingame yet, so I was wondering if we will see him later?

the game isreally impressive i love it :)

I'll update it against next month!

With All Thanks to the Creator of the Game!!!

I really appreciate this!

i just Finished with what you have made it up to and i really enjoyed it i hope you do more soon its good :)

I'll do what I can in the following weeks.

My plan is to have one update per game per month!

Hopefully that will work out as planned.

I'm glad you enjoyed yourself.

i'm glad and i can tell you had fun making this so as long as you keep having fun with it i bet a lot more people  will play it :)

is there another way to download the game? becaused when i tried it said failed or forbidden

I'm going to update the game this week, and so please hold tight until I do.

i'm looking forward to it then thanks for replying 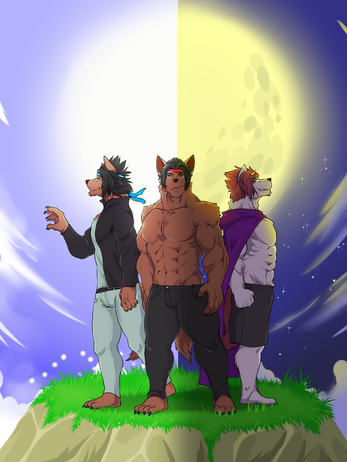